What is Conjunctivitis? Causes, Symptoms & treatment

Conjunctivitis, often referred to as pink eye, is a common condition that causes inflammation of the surface of the eye, and the tissue that surrounds it. Conjunctivitis is the most commonly seen eye disease by general practitioners, and is estimated to represent approximately 1% of all consultations in primary care.

The symptoms of conjunctivitis include sensations of pain, burning, and itchiness, and a red or pink appearance of the affected eye. There may also be mild swelling, as well as a light fluid discharge, which can dry and become crusty over night. This can cause the infected eye to become sealed closed in the morning, but this can be remedied with the application of a warm, damp, clean cloth.

Nearly all cases of conjunctivitis will clear up in one to two weeks time. In the event that the symptoms continue to worsen, or have not reduced in that period, it's possible that another condition is causing them, and that the diagnosis of conjunctivitis was inaccurate. Some fungal and microbial infections can exhibit similar symptoms at first, which may not differentiate themselves until sufficiently developed. It's always important to seek out professional medical attention any time there is an eye-related health problem.

Conjunctivitis is an inflammation of the conjunctiva, a thin, transparent layer covering the surface of the inner eyelid and the front of the eye. It can affect people of all ages although children seem to be particularly susceptible.


More often than not, conjunctivitis is caused by a viral infection, however a bacterial form of the disease also exists. It's even possible for it to be triggered by common allergens, such as pollen or animal dander.

There are several different viruses that can cause conjunctivitis, the most common being adenoviruses.
One of the most serious forms of conjunctivitis is caused by the herpes simplex virus, the same virus that leads to cold sores in and around the mouth.
A less common, but quite serious form, called acute haemorrhagic conjunctivitis, is caused by enteroviruses, and was only first discovered in 1969. It's potentially the most contagious form of the disease, and has caused several large epidemics throughout the world since its discovery.


As a group, bacterial forms of conjunctivitis are less common that viral forms, however not so much as to be considered rare. Much like the viral category, the bacterial form is also caused by several different pathogens. The three most common of them are Staphylococcus aureus, Streptococcus pneumoniae, and Haemophilus influenzae. It's possible for these forms of the disease to last much longer than 2 weeks, and possibly even become chronic. However, with proper treatment of antibiotics, these are also the most curable forms of conjunctivitis.

Even less common than bacterial infections are allergen-triggered forms of conjunctivitis. These can be caused by any substance, biological or chemical. Pollen, animal dander, perfumes, make-up, dust, skin mites and even certain types of eye drops can cause a sever allergic reaction. While not at all contagious, this form can be difficult to treat if the allergen that's triggering the condition isn't known, if it is known, eliminating it from the environment is an important step in treating the symptoms. 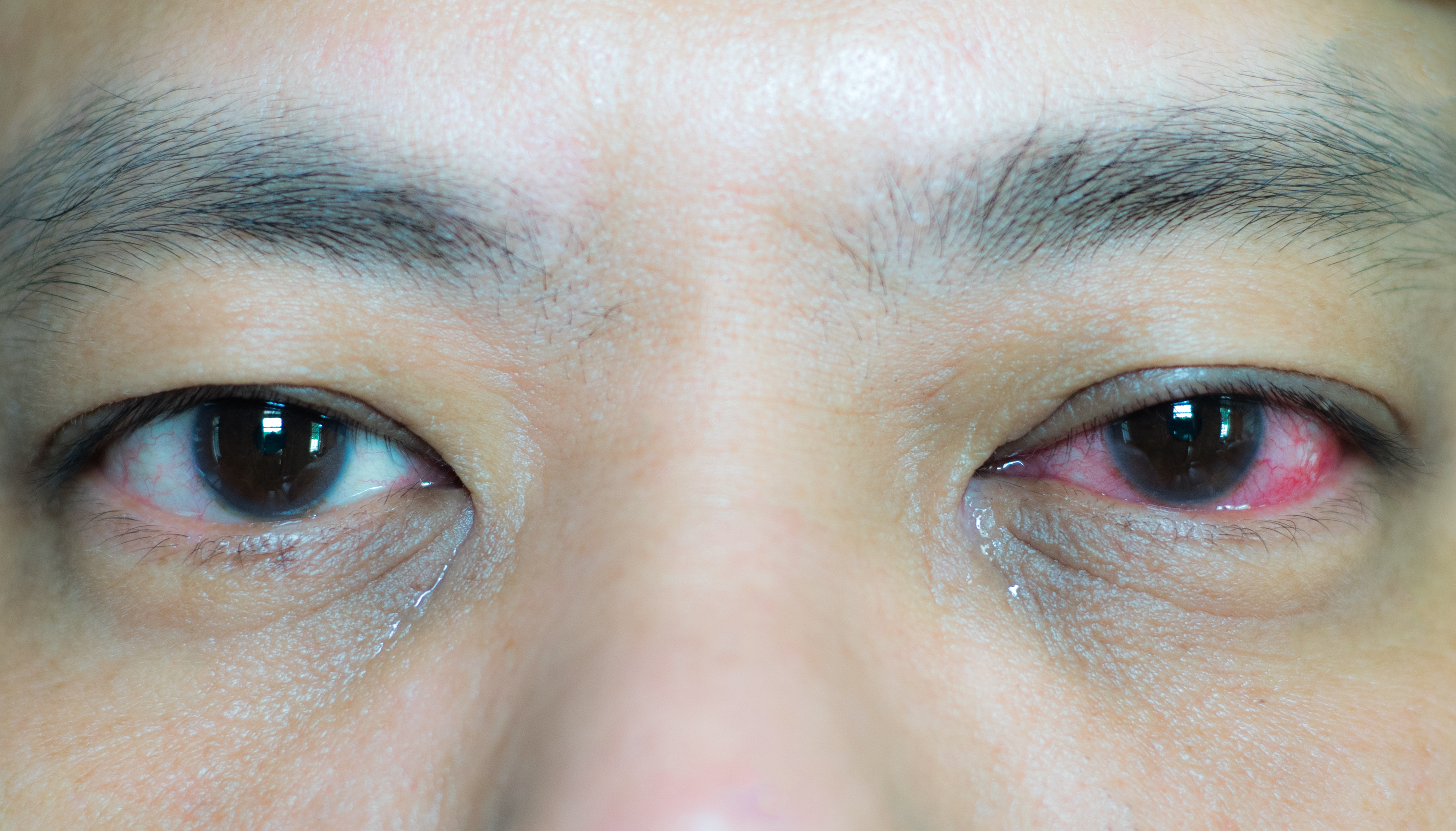 Some or all of these are apparent in all forms of the disease, no matter the individual cause. Conjunctivitis does not affect visual acuity at all, nor the reactivity of the pupil.

There are other symptoms that each of the three forms of conjunctivitis is individually associated with.

Viral conjunctivitis is often seen in conjunction with signs of upper respiratory infections, or the common cold. The eyes are typically more watery than in other forms, and while it may only start with one eye, it can very easily spread to the other. Compared to the redness caused by other forms, viral conjunctivitis is typically a mild pink, and cause for the common name of pink eye.

Conjunctivitis can be highly contagious, it is important to know what is causing the infection, if it is viral or bacterial you will need to take strong action to prevent spreading the infection, however if conjunctivitis is caused by an irritant such as make-up, animal fur, dust, pollen etc then it is unlikely to be infectious.

✔️Throw away any open mascara

❌Touch or rub your eyes

Regardless of the form, anyone suffering from conjunctivitis that regularly wears contact-lenses should remove them for the duration of the infection, and dispose of the lenses that were worn when symptoms began to show. It is important to also replace the storage case, as the infection can remain in there. The possibility of reinfection is high if the lenses are re-used, and wearing them during the infection will cause the infection to worsen drastically.

Many remedies and treatments for conjunctivitis are available over the counter, so it is worth speaking to your pharmacist who can offer advise about eye drops or antihistamines to help relieve your symptoms, if you need treatment for a child under 2, you'll need a prescription from a GP.

Most forms of prevention come down to good personal hygiene. Some tips include:

Allergen -triggered conjunctivitis isn't communicable, so hygiene plays less of a role in its onset. Instead, speak with your doctor about your personal allergies, and what methods work best for limiting both their symptoms, and your exposure to them.