When a child is born their vision is not fully developed so although your child may have had perfect eyes and vision at birth that doesn't mean that they will not develop an eye condition as a toddler or at sometime throughout their childhood.


The sooner you recognise an issue with your child's eyes or vision the sooner treatment or correction can begin, this is particularly important with children as some condition if left untreated for a relatively short period of time can have long lasting or even permanent consequences.

Being able to spot when your child is having problems with their vision can not just help them medically but can have social, academic and mental health benefits.

Signs and Symptoms of Vision Problems in Children

The above list is a general set of signs and symptoms that would indicate your child may be having problems with their eyes or their vison and should always be checked out, however there are many childhood vison problems with their own set of signs and symptoms so are easier to diagnose and react to. Here we list the most common childhood eye conditions.

What is a Chalazion?

A chalazion is a harmless, painless bump just inside the edge of either the upper or lower eyelid. They are often the result of old styes that have mostly healed, and are no longer infected.

Basically, a benign cyst growing out of one of the Meibomian glands in the eye lid, which are responsible for producing the oily substance that lubricates the eyes. Although a Chalazion may cause the eyelid to appear red and swollen, they pose no real risk.

Signs and symptoms of a Chalazion

What is a Stye?

A stye is a swollen and infected Meibomian gland within either the upper or lower eyelid. These glands normally secrete small amounts of an oily liquid that helps lubricate the surface of the eye, and prevent tears from evaporating too quickly. When these glands become clogged, they can fill with this fluid and become infected.

A stye is not very dissimilar to a common pimple.

Signs and Symptoms of a Stye

A Chalazion and a Stye are very similar and sometimes can refer to the same thing. When the opening of the Meibomian gland becomes blocked, the fluids can back up, swell, and even become infected. This is called a stye. Once the infection is gone, but the build-up remains, it is then referred to as a Chalazion.

Differentiating between a Chalazion and a stye can be difficult as they can look very similar, but there are a few things that define them 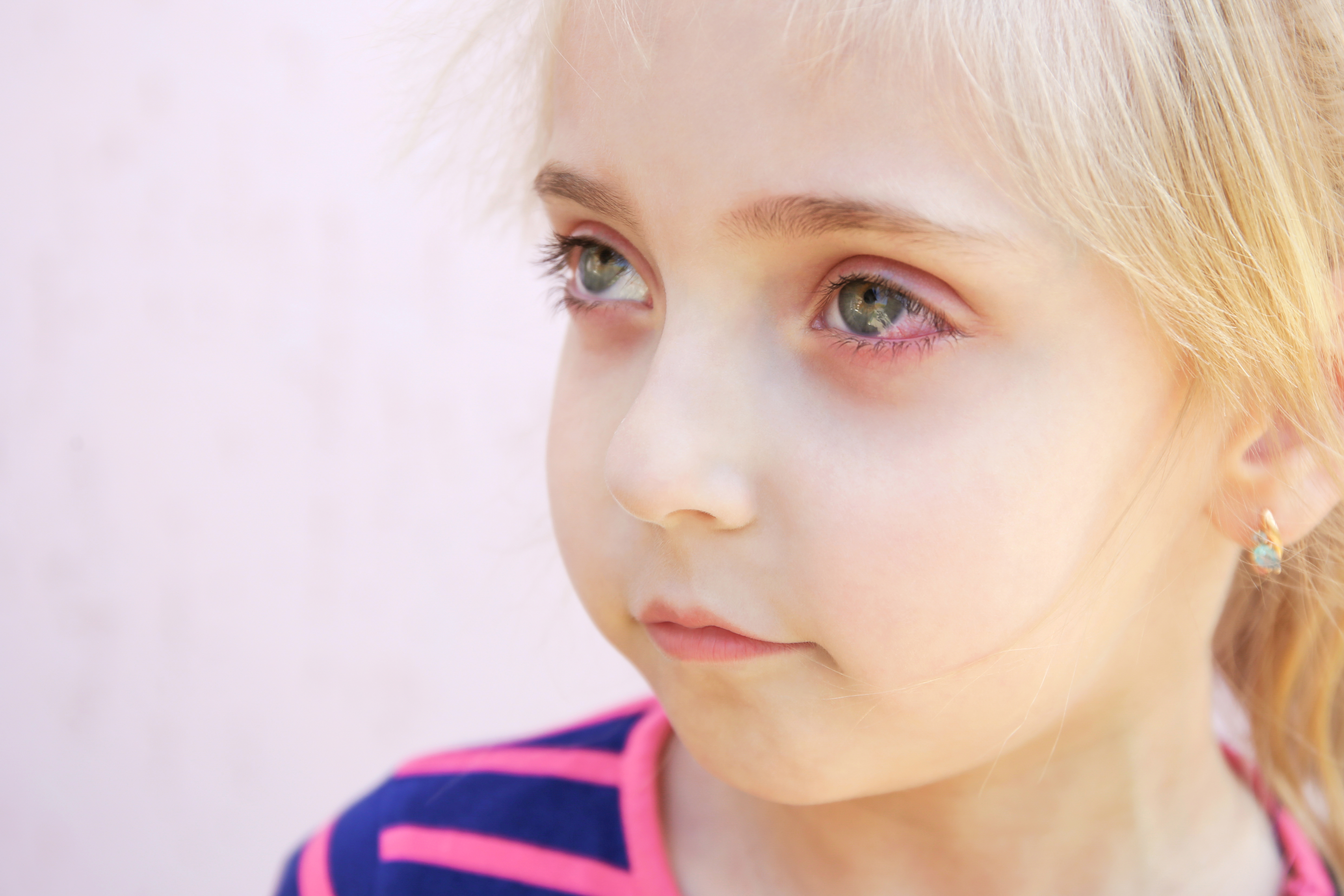 Conjunctivitis (kun-junk-tih-vy-tus) is often referred to as pink eye as it causes the eye to become pink or red, and is a common condition that causes the inflammation of the surface of the eye, and the tissue that surrounds it.

According to the National Library of Medicine, it is estimated that approximately 1% of all consultations in primary care are due to conjunctivitis.

Signs and Symptoms of Conjunctivitis

Conjunctivitis is very contagious if it is caused by a virus or a bacterium, however if the pinkeye is caused by an irritant such as animal fur, dust or pollen then it is unlikely to be infectious, It is important to determine the cause of pinkeye, especially in children, as if it's infectious, children are at far greater risk of spreading the condition.

If you are unsure whether the pinkeye is infectious or not it is best to assume that it is infectious and act accordingly. A child will need to remain away from school, and at home precautions will be need to be taken to prevent the spread to other family members.

It is rare that adults would need to remain away from work.

Strabismus which is commonly referred to as a squint or cross-eyed, is a condition whereby the eyes do not work in unison, commonly causing one eye to move in a different direction. Most commonly seen in infants and young children, but can also develop in adults

Strabismus can present itself in one of four ways

Signs and Symptoms of  Strabismus


Unfortunately Strabismus does not get better left alone, it needs medical intervention, untreated Strabismus can lead to poor vision, a squint, amblyopia or lazy eye. A child over 4 months of age who's eye do not track objects uniformly should she an Optometrist or doctor who can check for Strabismus and initiate treatment.

According to the Royal National Institute for the Blind (RNIB) squints are common, affecting around 2-3 per cent of children in the UK

Amblyopia is the medical term for Lazy Eye and refers to the disorder whereby the vision does not develop properly in one eye even when corrected by glasses or contact lenses. Lazy eye develops when the connections in the brain responsible for vision are not formed correctly during the first 8 years of a childs life.

The most common causes for Lazy Eye are Strabismus or squint or Ptosis (a droopy eyelid). According to Medical News Today, in a 2013 study of 107 children with ptosis, researchers noted lazy eye in around 1 in 7 of the participants.

According to the NHS it's estimated that 1 in 50 children develop a lazy eye.

Signs and Symptoms of Amblyopia 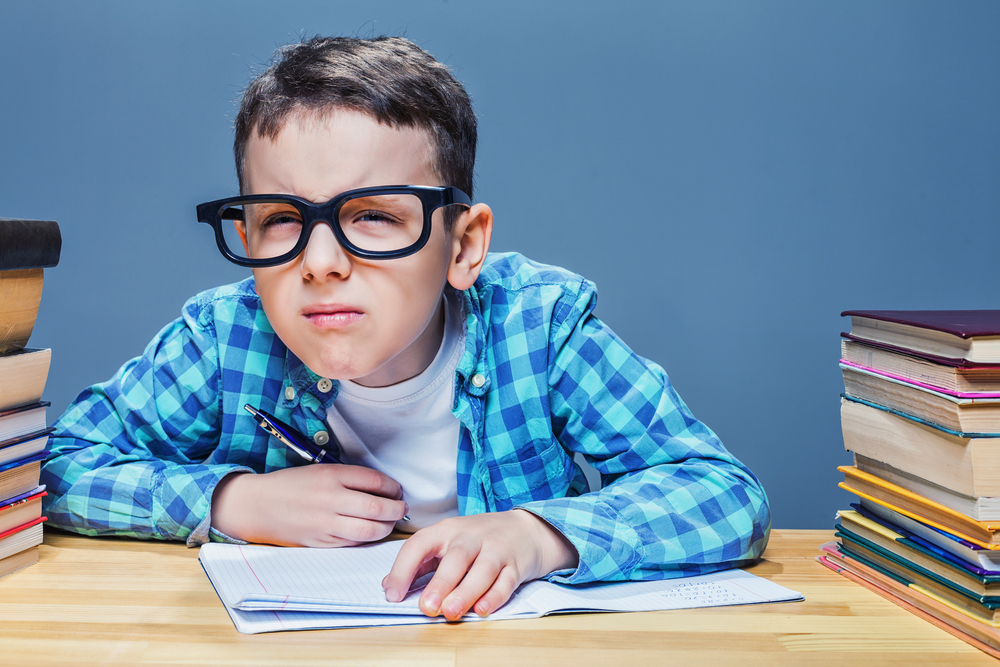 Amblyopia or Lazy Eye is not always obvious, children may have a poor depth of perception or struggle to see things clearly, in many cases parents or carers do not realise their children have a Lazy Eye and it is often first recognised in an eye exam This is why it is important to get children's vision tested somewhere between the ages of 3 and 5 years of age.

Nystagmus is a medical condition causing constant involuntary movement of the eyes, most commonly the eye movements are up and down, but can also be side to side or even circular in nature, this movement can cause visual impairment, reduced ability to judge depth and speed, reduced vision and make it difficult to recognise faces.


According to nystagmus network Nystagmus is the most common issue causing visual impairment in children, and it affects approximately 1 in 1,000 people.

Signs and Symptoms of Nystagmus

Unfortunately there is no cure for nystagmus, but it can be managed, and there are techniques and aids available to get the best vision possible, for further information check out RNIB and Nystagmus Network.

Epiphora is a condition whereby the eyes water excessively, this can be caused by the production of excessive tears or a blocked tear duct and is a not uncommon problem in the very young and the elderly.

Babies are known to produce excessive tears at times and add this to the fact that their tear ducts are relatively narrow and it's no big surprise that a baby is more prone to epiphora or watery eyes. The inability to drain all the tears produced can lead to babies developing "gunk" in the corner of their eyes, even when no infection is present.

Epiphora can also be caused by a blocked  tear duct, known as nasolacrimal duct obstruction (NLDO) which according to American Academy of Ophthalmology (AAO) effects approximately 5% of infants, although unsightly this is often painless and can spontaneously clear up on its own in the first few months. If you are concerned about your childs eyes, always seek out medical advice.

Signs and Symptoms of Epiphora

Ptosis pronounced - toe ses - is the drooping of an upper eye lid or eye lids. The amount of drooping can range from very mild whereby it's hardly noticeable to severe, whereby the dropping eyelid covers much of the eye. This becomes a problem when the drooping eye lid covers the pupil as this can effect the vision.

Ptosis is seen in children and adults. If a child is born with Ptosis this is called congenital ptosis and is normally indicative of an issue with the muscles that lift the eyelid. A child born with ptosis can often have other eye related problems such as eye muscle disease, eye movement issues, tumors etc and develop eye related problems such as amblyopia (lazy eye) or a squint.

Signs and Symptoms of Ptosis

Fortunately in most cases ptosis can be treated, if the ptosis is mild in young children it is often just monitored initially to see how it develops and to asses if it effects vision, in more severe cases surgery may be the only option to prevent future vision problems.


If you suspect your child has ptosis make an appointment to see your Optometrist.

What Is A Childhood Cataract?

Many people associate cataracts with the elderly, however, they can develop at any age. Fortunately childhood cataract are rare, only appearing in 1-6 per 10,000 babies or children.

A cataract is caused when the lens in the eye or eyes becomes less transparent and more opaque, this leads to the vision in the effected eye(s) becoming cloudy or hazy. The pupil can appear a greyish/white colour as if a layer of skin has grown over the eye but this is not the case and the whiteness is actually a reflection of the light from the cloudy lens.

Cataracts in children can be divided into two main categories

Signs and Symptoms of Childhood Cataract

Many of the signs of a cataract can also be a sign of other eye or health problems, if you notice any of the above signs and symptoms or your child complains of any of these, you should see your Optometrist or GP for tests and diagnosis.

A short note here on Leukocoria 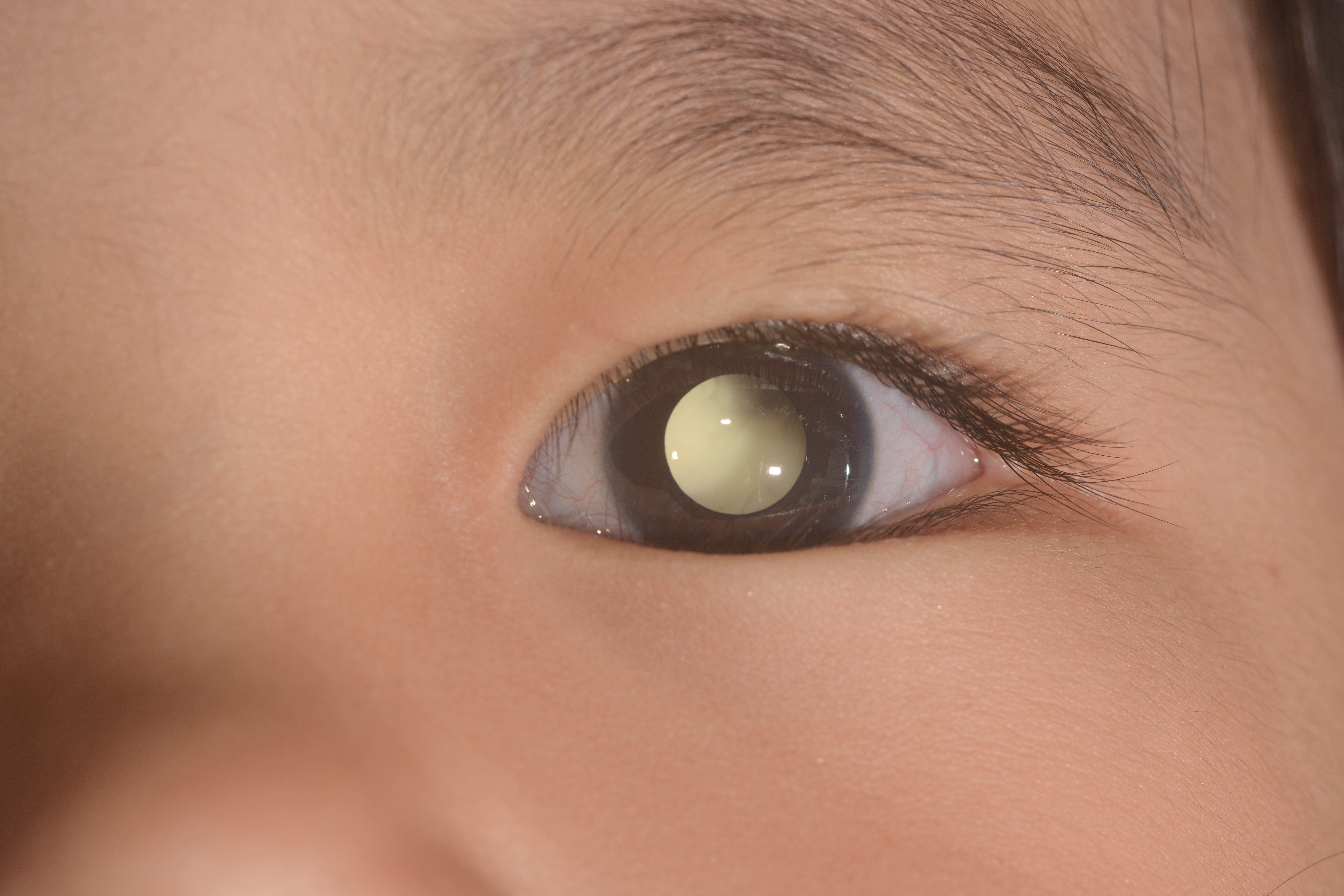 In photos the pupil is normally black in colour, but can be red if a flash or bright light has been used, however, if you notice that your child's eye or eyes appear white in photos you should take them to an Optometrist or family doctor as white eyes in photos can be the first sign of symptomless eye conditions such as

A child born in the UK will have their eyes tested several times before they start school,

If you notice any changes or abnormalities with your children's eye or if you child begin to complain of changes to there vision you should always check this out with your Optometrist or family doctor.

Did you know a child does not need to be able to recognise their alphabet or read to have a successful eye test? an Optometrist can check the vision and health of a child or babies eyes using a retinoscope.

So that all children have access to free eye test they are provided free on the NHS in the UK.