Contact lenses have a remarkable history that goes back more than 500 years. It seems that people have always wanted a way to see clearly without having to rely on eyeglasses. It was simply a matter of time before the technology was available to deliver a practical solution. Contact lens history is an interesting subject to learn about, especially for those who rely on these tiny but complex items.

Leonardo da Vinci is often credited with the first conception of the idea of contact lenses in 1508, in Codex Of The Eye, 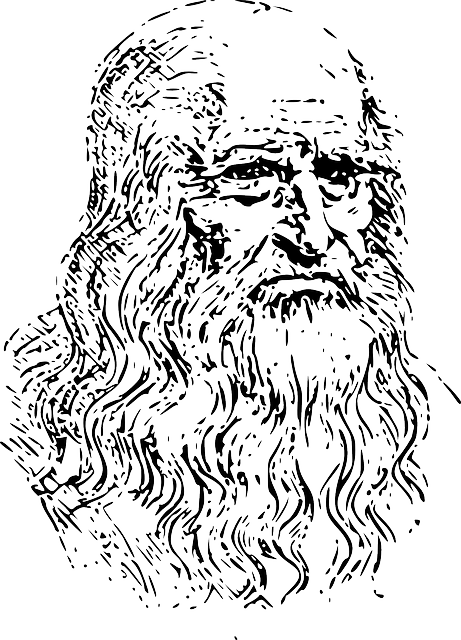 Manual D. Here, he described a means of manipulating the corneal power by either submerging someone's entire head in a bowl of water, or wearing a water-filled glass hemisphere over the eye. Obviously, neither idea was very practical in his time, or in any other, for that matter, but he was not suggesting these ideas be used for the purpose of vision correction. Instead, he was interested in learning about the mechanisms and functionality of the eye.

René Descartes conceptualized a similar idea in 1636, in where a hollow glass tube filled with water placed directly against the cornea, with the protruding end being shaped in order to correct vision. The only drawback of the idea was it made blinking completely impossible.

In 1845, Sir John Herschel published two new ideas in the Encyclopedia Metropolitana. The first was for a spherical capsule of glass filled with animal jelly, while the second was a mould of the cornea that could be impressed on a transparent medium, albeit it of indeterminate nature. While there's no evidence that he ever tested these ideas, both would later be used as a basis for further development by Hungarian Dallos and István Komáromy in 1929. The two perfected a method of making molds from living eyes, which then enabled the manufacturing of lenses that, for the first time in history, conformed to the actual shape of a person's eye.

But that's getting a bit ahead of things. There were plenty of other developments taking place in the late 1880s, all around the same time as one another.

Jumping backwards to the year 1887, German glassblower F. E. Muller developed the first eye covering that could be both seen through, as well as tolerated. Up until this point in time, any relatively comfortable device that could be placed on the eye made seeing more difficult, or impossible, and any device that improved vision was unbearably uncomfortable. 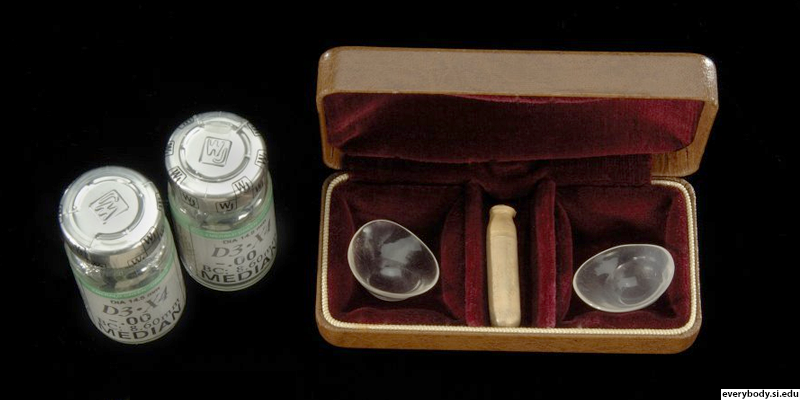 The construction and fitting of the first successful contact lens was done by German ophthalmologist Adolf Gaston Eugen Fick, in 1888. Working out of Zürich, he fabricated afocal scleral contact shells, which were designed to lie on the less sensitive area of tissue around the cornea. His experiments progressed from fitting them on rabbits, then on 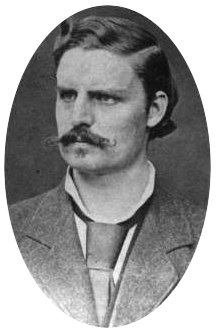 himself, and eventually on groups of brave, yet willing, volunteers. His lenses were made from heavy blown glass, and were roughly two centimeters in diameter. What made these lenses to much more comfortable that previous attempts was the filling of the empty space between cornea/callosity and glass with a dextrose solution. While a huge step forward in lens technology, they are rather large, inconvenient, and could only be worn for a few hours at a time.

Around the same time in 1888, German scientisc August Müller in Kiel was able to correct his own myopia, which was rather severe, with a slightly more convenient and comfortable glass-blown scleral contact lens of his own design. Aside from some of his research notes, not much evidence of these lenses still exist.

Glass-blown scleral lenses continued to be the one and only form of contact lens available until several decades later, when in the 1930s, polymethyl methacrylate was developed, better known today as Plexiglas. This new plastic allowed thinner and more comfortable scleral lenses to be manufactured.

The first of these first appeared in 1936, and were developed by optometrist William Feinbloom. His revolutionary plastic lenses were thinner, lighter, and more convenient. But there was still plenty of room for improvement. They were a balanced combination of glass and plastic, and full plastic lenses were still yet to come.

Just a few short years later, in 1940, German optometrist Heinrich Wöhlk produced the first fully plastic lenses, based on work of Feinbloom in the 1930s.

Up until this point in history, all of the lenses that have been developed, successful or not, have been scleral lenses, meaning they sat on the large, white area of the eye, rather than the cornea, which is much smaller, and works as the eyes natural refractory lens.

The first corneal lenses were developed in 1949, and were much smaller and more comfortable than the previous scleral lens designs. They rested strictly on the cornea, instead of across all of the visible ocular surface. The increased comfort allowed to the be worn up to sixteen hours a day, where as previous lenses could only be worn for 3-4 hours at a time. As manufacturing technology improved into the 1960s, and lens designs became more sophisticated, Plexiglas corneal lenses became the first contacts to have mass appeal. 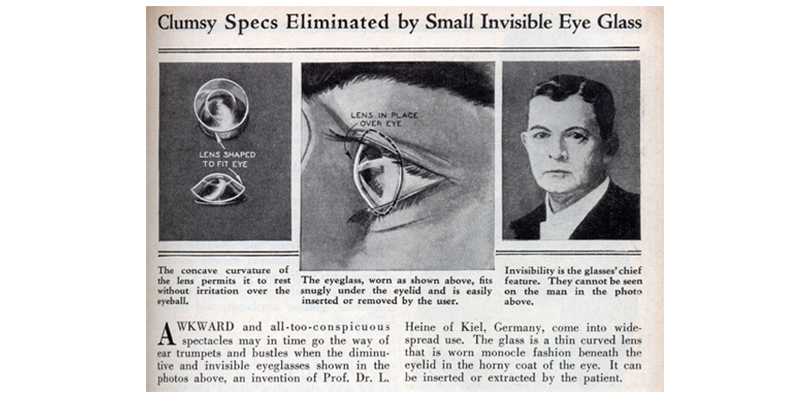 Between the late 1950s through to the mid 1990s, contact lenses were both expensive and fragile. The risk of damaging them was so great, that Replacement Lens Insurance was available to protect people who wore contacts from having to pay out of pocket should anything happen to their delicate lenses. Advancements in contact lens technology eventually made them less expensive and more flexible, causing the entire RLI industry to be phased out by 1994.

One of the more limiting disadvantages of Plexiglas lenses is limited amount of oxygen they allow through to the surface of the eye. This can lead to a number of negative and potentially serious side effects. This spurred new research and development, that by the end of the 1970s, led to a range of oxygen-permeable yet rigid materials that overcome this problem. These "rigid gas permeable" polymers, commonly referred to as or RGP, were the staple contact lens format through the 1990s.

Along side RGP lenses, soft lenses were also being researched and developed, although their success wasn't an overnight process. The early research into soft lenses was done by Czech chemists Otto Wichterle and Drahoslav Lím, which began in 1959. Several years later, in 1965, the National Patent Development Corporation in the United States purchased the rights to produce the lenses, but sublicensed them to Bausch & Lomb. Soft contact lenses were only sold in a few small countries, but really began to gain popularity when they were finally approved for sale in the USA by the Food and Drug Anministration in 1971.

Not long after, soft lenses were prescribed more often than rigids. A clear advantage over RGP lenses was their immediate comfort. Unlike soft lenses, which conform to the shape of the eye, RPG lenses take some time to get used to as the eye shapes to the lens. Some people find rigid lenses comfortable in as little as a few days or weeks, while other never completely adjust.

Gradually, over the next 25 years, the polymers from which soft lenses are manufactured improved time and time again. Increases in oxygen permeability and wetability, made them more comfortable, and decreases in manufacturing costs made them literally disposable. In fact, disposable soft contact lenses were first conceived by British optometrist Rishi Agarwal in by 1972. 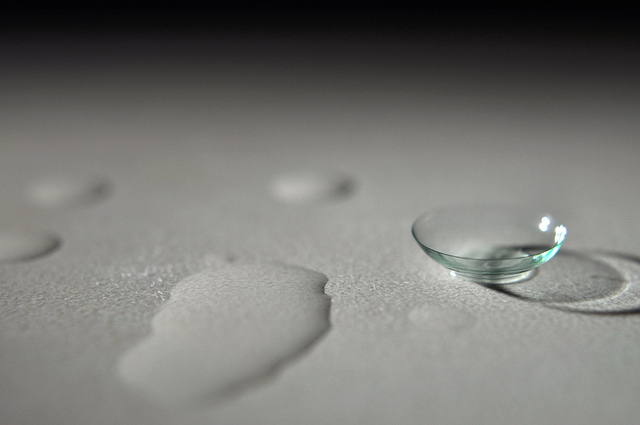 One of the more recent improvements made in contact lens technology was the development of the first silicone hydrogel lenses in 1998, by Ciba Vision in Mexico. These new lenses utilised the benefits of silicone, which has much greater oxygen permeability than previous materials. Additionally, the new silicone hydrogel material performed just as well as the standard hydrogel, which had been in use for more than 3 decades. This allowed for the sale of the first soft lenses that were suitable for extended (overnight) wear, with no compromise needed in regards to vision correcting ability.

Today, through constant research and occasional scientific breakthroughs, current silicone hydrogel soft contact lenses have water content as high as 46%, making them practically undetectable when worn, and comfortably wearable for weeks at a time. The big question on every one's mind now is, where will contact lens technology take us next?