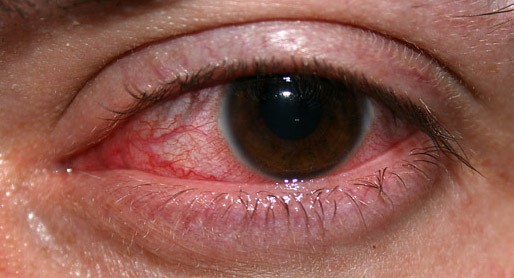 Fungal Keratitis, sometimes referred to as keratomycosis, is an eye infection caused by fungus that results in an inflammation of the eye's cornea, the thin, clear covering at the front of the eye. Any one exhibiting symptoms of fungal keratitis should seek the attention of an eye care professional immediately.

Keratitis, and other infections of the eye, can be bacterial, fungal, viral, or protozoal in nature. The symptoms of the infection can very widely depending on the type of infection. Because the symptoms are often unique to each possible cause, the diagnosis of the cause can be someone simplified.

What Are Symptoms of Fungal Keratitis?

For fungal keratitis, the symptoms include blurry vision, redness, sensitivity to light, excessive tearing or discharge,
and pain. The symptoms will persist even after contact lenses have been removed, and antibiotics will have no effect. While similar to a bacterial infection, the symptoms are typically much less severe. There may also be sensitivity, redness, or ulcers in the surrounding tissue, such as the eye lid and conjunctiva. In very rare cases the infection may spread to the rear of the eye, which can cause endophthalmitis, and total loss of the eye.

There are five types of fungi that can lead to fungal keratitis. Four of them are filamentous fungi, aspergillus flavus,
aspergillus fumigatus, fusarium, and alternaria. The fifth is a type of yeast, called candida. The means by which these fungi infect the eye is usually through contacts with plants, dirt, or some other type of organic matter. A thorn injury, for example, could both penetrate the surface of the eye, as well as transfer the fungi from the plant onto the cornea, where it then begins to grow and multiply. Symptoms will begin to present several days later. Another common cause of keratitis is improper cleaning of contact lenses.

How is Fungal Keratitis Diagnosed?

An ophthalmologist or optometrist will assess the visible symptoms, and discuss recent events with the patient. In
some cases fungal keratitis may be mistaken for bacterial keratitis, so it's common for a culture report to be used
to establish an accurate diagnosis.

How is Fingal Keratitis Treated?

Medicated eye drops are the likely course of treatment. Filamentous fungi is treated with natamycin ophthalmic solution, while candida yeast is treated with fluconazole ophthalmic solution. In situations where the infection does not respond to the appropriate medication, a third option is available, amphotericin B, but it can be quite toxic on its
own and is only used when absolutely necessary. The time needed for a full recovery can be as little as a few weeks, or even several months in some cases.