What is a Black Eye?

What is a Black Eye? 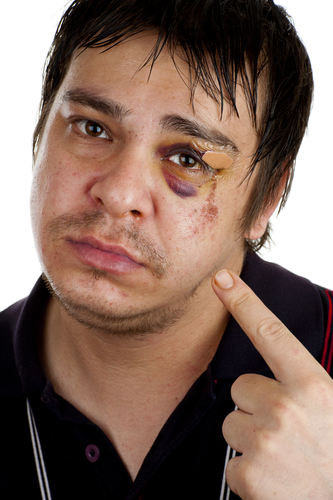 Nearly every black eye comes with a story, and usually not a very fun one, since they're caused by a blunt force trauma to the eye. Their medically referred to as periorbital hematoma, but your grand dad would probably call it a shiner.

A black eye's dark appearance comes from the fluid build-up, usually blood, in the tissue surrounding the eye. The skin in that area of the face is very thin, and virtually transparent when stretched thin. As fluids build up, and cause the area to swell, they can be seen easily, giving a black eye its distinct appearance.

The cause of a black eye can be varied, but almost always involve some form of blunt trauma to the eye. People get them in car accidents, while playing sports, from slipping and falling, and from physical violence. They can even occur as a result of severe sinus infections, and some medical operations, such as dental work or cosmetic surgery.

In very serious accidents, in which areas of the skull become fractured, the internal bleeding that leads to a black eye can also lead to serious infections. If the bleeding occurs inside the eye itself, a condition called hyphema, emergency medical attention should be sought, as the increased pressure inside the eye can lead to permanent blindness. Below are list of signs or symptoms that should not be ignored, and call for professional medical attention.

Black eyes aren't usually anything to worry about, and can be treated like any other type of bruise. However, since there is a risk that serious underlying damage may have occurred, it's always a good idea to have a doctor look at it and check for signs of other issues.

If there doesn't appear to be any reason to assume a more serious injury has occurred, a simple ice pack is the best way to soothe a black eye. Try to use a cold compress that can conform to the shape of the eye and face. A gel pack or package of frozen vegetables will do much better than a solid freezer pack or bag of ice cubes. In a pinch, a metal spoon chilled in ice water can be applied to the area, and re-chilled frequently. Only apply cold packs to the eye for 15 minutes at a time, resting for an hour in between each application. Regular over the counter drugs should be enough to address the pain.

Healing time for a black eye is usually one to three weeks, depending on its severity. As it heals it might change colors, showing shades of purple, green, blue, and yellow. This is caused by the different bodily fluids suspended under the skin as they slowly break down and are flushed away by the circulatory system.