How does Seasonal Allergic Conjunctivitis affect your Eyes and Contact Lenses?

Hay fever is also known as seasonal allergic conjunctivitis or allergic rhinitis and is an allergy causing the body to overreact to air borne particles released by plants, the symptoms can range from mild to severe and include:


There are two main classifications of hay fever

Conjunctivitis Is a year-round allergic condition. This allergic response is often related to animal dander, dust (including carpet dust), or other allergens that are present in the environment year round. Symptoms are similar to seasonal allergic conjunctivitis: however, they tend to be milder.

These two allergies affect people more than all other types of ocular allergies and can cause considerable discomfort. People with asthma may have their condition triggered by seasonal allergies, as well.

What Is Hay fever?

Hay fever is an allergic reaction to pollen, When pollen comes into contact with your eyes, mouth or nose the  body reacts as though it were a dangerous threat to it's biological systems, even if there isn't any actual danger.

The immune system releases histamines that are designed to fight off invading bodies, such as bacteria, viruses, fungal spores, and even pollen. These chemicals are designed to pump increased levels of blood to specific areas of the body, such as the eyes, nose, and throat, where most invaders enter the body. In an effort to flush out the foreign invaders, the body increases tear and mucus production and an increased a sneeze reflex is triggered.

With roughly 10 million people suffering from hay fever in England alone, hay fever is undoubtedly one of the most common allergies in the UK. Indeed, doctors at London’s Royal National Throat, Nose and Ear Hospital estimate that roughly 1 in 4 UK residents suffers from a bout of hay fever at some point in their lives.

What Are The Common Causes Of Hay Fever?

It may be surprising, but grasses are the most common cause of hay fever. However, Ragweed is a main cause of weed allergies. Other common sources of weed pollen include lamb’s quarters, pigweed, sagebrush and tumbleweed. Certain species of tree pollen can also cause hay fever reactions, including birch, cedar and oak.

Plants fertilized by insects, like roses and some flowering trees, like cherry and pear trees, usually do not cause allergic rhinitis. 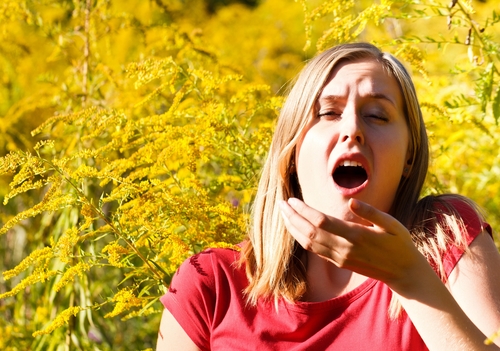 Many people assume that they are allergic to weeds or the pollen from weeds. As seen above, the grasses are the most likely culprit. However, weed pollen does indeed case hey fever. Dock, Mugwort, Nettle, Oilseed and Plantain weeds create the most hay fever in the UK. Mugwort is a very persistent and hardy perennial plant, it is native to Europe and Asia, and is a member of the Asteraceae family, which includes daisies, sunflowers, dandelions, and ragweed. Growing up to 1.8 meters in height, and appearing reddish-brown in colour, mugwort is usually found near streams, on rocky soil, and in rough terrain. Its pollen is very allergenic, and the most common cause of hay fever. The pollen can travel up to 2,000 while meters floating in the air.

grass pollen is recognised as one of the main causes of hay fever, the two main culprits are

Also known as English Ryegrass, this grass is found throughout Britain. This grass was once exclusively cultivated for agricultural purposes and is now found growing wild along roadways, most likely due to seed being spread during transportation. Perennial Rye is a harsh, coarse grass with green stems and thin, blade-like leaves.

Also called cat's tail grass, it is an abundant perennial grass native to Europe, although it is rare in areas near the Mediterranean. It has wide, flat leaves and grows to more than a meter in height. The easily recognizable flower head is up to 140 centimeters long and purple or brown in colour.

About 20% - 25% people are allergic to one or more types of tree pollen. If your hay fever kicks in during March or April, you could be allergic to tree pollen. You are most likely to be allergic to the pollen of these trees: Oak, Ash, Cedar, Birch, Hazel, Alder, and Horse Chestnut. Other trees which produce pollen that you may be allergic to include Elm, Yew, Willow, Poplar, Plane, Pine and Lime trees.

When Am I Most Likely To Suffer From Hay Fever?

Seasonal allergies are referred to as such because they are triggered in different seasons. The time of year, time of day, and weather conditions play a role in how much pollen is in the air.

Weather And Time Of Day:

The amount of pollen in the atmosphere drops on rainy days. On sunny days, pollen count is highest in the evening. Pollen is spread greater distances on windy days. On warmer days, flowers open and more pollen spreads. Humidity plays a role as well, and on humid days there is more pollen in the air. Many local weather stations also provide current pollen forecasts based on current weather conditions. Check out the daily pollen count in your area at the met office.

Allergy season can be broken down into three basic periods: spring, summer, and fall. Below is a list of the plants which fall into those phases, the
time of year they are most likely to bloom, and the time of their peak pollen production.

Pollen season for grass typically begins in early May and ends in the middle of September. The peak, however, is all of June and July.

Weed pollen season is throughout the year depending on the weed, but the biggest culprit is mugwort which peaks in late July and runs through the middle of August.

How Do You Prevent Hay Fever?

Although you cannot cure hay fever there are few things you can do to prevent or reduce hay fever symptoms:

Do put some Vaseline around your nostrils to trap pollen.
Do take a shower and change your clothes after you have been outside.
Do stay indoors and keep windows and doors shut as much as possible.
Do wear wraparound sunglasses to prevent pollen getting into your eyes.
Do vacuum regularly with a HEPA (high-efficiency particulate air) filter and dust with a damp cloth.
Do use a pollen filter for the air vents in your car

Do not cut grass or walk on grass.
Do not spend too much time outside.
Do not keep fresh flowers in the house.
Do not smoke or be around second hand smoke – it can make symptoms worse.
Do not dry clothes outside – they can collect pollen.
Do not let pets into the house if possible – they can carry pollen indoors.

Relief from hay fever comes in many forms. Allergy shots, a desensitization process, can be helpful for some people in reducing symptoms and the need for other medications. There are also various topical and oral medications readily available at local pharmacies and drugstores. For particularly serious cases, a variety of prescription medications are available.

One of the most effective things you can do however, is to check with your doctor, allergist or eye care professional first. He or she can properly diagnose your condition and recommend the best treatment for you.

Most medications fall into the antihistamine category, either topical or oral. Both work to block the release of histamine, which causes many of the symptoms.

Orally ingested antihistamines may partially relieve ocular symptoms. They can be a convenient way to obtain relief although it can often take an hour or more before they begin to work. Some oral antihistamines can produce unwanted side-effects such as drowsiness, irritability and dryness. Oral antihistamines work best if taken before exposure to the allergen, but pollen release is dependent upon many seasonal and daily climatic factors that can't be accurately predicted.

Topical antihistamines in the form of eye drops, may prove the most effective way to get relief from Hay Fever. Unlike oral medications, eye drops allow the medication to get directly to the affected eyes. Many contain both an antihistamine and a decongestant. Applied when necessary, these drops can alleviate within minutes most of the annoying symptoms such as itching, redness, tearing and swelling.

New and highly potent prescription topical antihistamines are also available from your doctor that work on contact and provide hours of relief with virtually no side-effects.

Can I wear Contact Lenses If I Suffer From Hay Fever?

The good news is you can wear contact lenses when you have hay fever, Optometrist often recommend Daily disposable contact Lenses when hay fever strikes. The reason for this is the lenses are fresh every day so there is less time for pollen to build up on the lens and cause an allergic reaction. 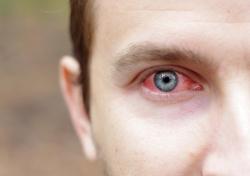 Unfortunately, pollen can easily attach itself to contact lenses and cause you many (literal) headaches during hay fever season. For this reason, your Optometrist may recommend swapping to regular eyeglasses or wearing some form of eye protection over your contacts during the height of hay fever season.

It’s a good idea to closely watch the pollen levels on a day-to-day basis. If you see pollen is excessively high (especially over 50 grams per cubic meter), then please leave your contacts at home.


Stock Up At Contactlenses.co.uk Before Hay Fever Strikes!

Besides our extensive list of lenses, we have many secondary items that could help prevent you from the discomfort associated with hay fever. For instance, we now have a huge catalogue of UV-blocking sunglasses, all-in-one solutions, and highly awarded re-wetting drops.

Interested in learning more about our products? Be sure to visit our main webpage or reach out to one of our friendly staff members here.